I went to work yesterday without my cell phone. Of course, I thought I had it in my bag the whole time until when I was about to leave my office that I realized it was no where to be found. I thought it was in my car and even went back to my office again to look for it again after I left. My mind began to track back where I had been the whole day, and I wasn't sure if I had left it at the Taj Mahal where I had lunch. I had already planned on meeting Will and Naeem for dinner and a movie later, so I didn't have time to go home to look for my phone. The whole time I felt really uneasy because I was worried that plans might have been changed, and I was not informed. I was worried that Eric might call to let me know he's going to join us and couldn't get ahold of me. My mind was just wandering in all directions that things might have changed and I was the last one to know about it. I was the same guy, whom a few years ago thought I really don't have the use of a mobile phone. The reason that I got it is that it just looked cool to have a cell phone as an accessory for your ensemble. Who would know that I would become addicted to my phone, that I have lost all trusts in my friends, that any appointments that we made verbally or through e-mail can be easily vetoed by just a phone call. My phone may very well not ring at all, but by just having it on me makes me feel like I'm secured and I have the right to be running a few minutes late, or change my mind on a restaurant or movie time... I was glad to see my phone sitting there at home when I first walked in after the movie. There was five unanswered calls: one from Eric telling me about his evening plan; one from Will asking if the restaurant was the right one because he was the only one on time; one from Jeff asking me last minute if I would like to join their trip to St Louis for the weekend; and two other calls from me tracking down my phone. Well, I guess I am not the only one who depend on my cell phone to make last minute plans or changes. I did get a few calls while my phone is sitting in my house. Almost all my friends has cell phones nowadays, and I bet almost all of them feel the same way if they leave home without their phones.
Posted by michaelongline at 4:37 PM No comments:

I frowned when I first saw the promo for "Queer Eye for the Straight Girl," but I thought I'll hold my judgment until at least after I watch an episode. True enough, this supposedly sister show hosted by the "Gal Pals" was just too hard for me to swallow. The whole concept of "Queer Eye for the Straight Guys" is to allow gay men who are (generally speaking) more in tuned with their feminine side to teach straight men a few tips to achieve the balance of their yin and yang. Women in general find gay men attractive because of their sensitivity to their feminine side. Metrosexual is IN and that's why the show is popular. Men want to learn a few tips to win women's hearts and women want to believe that their men can be buffed and polished into the Metro they've been dreaming of. As for "Girl", what is the point of the show? If it's just a make-over show, why bother making it into a Queer Eye spin-off. Isn't all male stylists and pros of every make-over show queer anyway? No offense, but isn't it totally queer to ask a lesbian about tips on how to be a lady?! Well, believe me. Her title is " Honey, the Lady"! Apparently her full name is Honey Labrador. What's with that? A pet name? I don't care if she modeled before in her past life or conditions her hair every time she shampoos. She was all giddy as soon as she put on a tool belt and had a power tool in her hands in the first episode. Maybe the other Gal Pals should seek advise from her on how to be a butch construction worker. So, what's the appeal of this show? Will straight men want to see any show that has less than two lesbians in it? Will straight girls be excited over learning the exfoliating tips from a lesbian, who's know as "The Lady"? Will gay men want to see a Cinderella story without the bitchy stepmother? And most of all, will the lesbians want to see a show that obviously added a token lesbian just so Bravo can broaden its viewership? Or, perhaps they're trying to be inclusive. I wonder what's next.
Posted by michaelongline at 10:13 PM 1 comment: 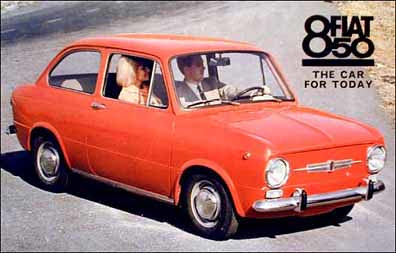 This was my first car.
My parents got me a used 1969 Fiat 850 as soon as I got my driver's license when I turned 18. I had it painted a bright school bus yellow just to make a loud statement since it was almost as old as I am. My school mates all nicknamed it -- "Porsche".
I had many memorable times, not so much on the performance of the car but the experience of riding with many friends in the short few years that I owned it. The stories and gossips that we exchanged, the fights between friends, and the crazy "big squeeze" of 11 guys to avoid walking in the rain between school buildings, the rides of my teacher because he's too afraid to drive, ran out of gas on the road that cut across a cemetery, broke down halfway in the middle of rush hour traffic, smoke came out from the engine due to over heating while climbing up a steep hill, my sister got stuck somewhere because she could not figure out how to put the gear into reverse... the stories go on and on. In a way, even though it is a funny looking old car, it is a time capsule that instantly transports me back to my wonderful teenage years. I miss my first car.

Posted by michaelongline at 6:05 PM 2 comments:

I've created another blog called "My Big Fat Blog" so I can keep track of the progress of my resolution for this year, to lose weight and look fabulous by this summer in time for my trip home to Malaysia. The blog is mainly for my own record so I can refer back to my goal if I ever go off course. Perhaps this will boost my motivation if I feel like I'm being "watched", even though I really don't think anyone is going to see the blog.
Posted by michaelongline at 9:31 AM No comments:

It has been a rather somber holiday week between Christmas and New Year. Having growing up in South East Asia, it is very hard for me to see such a disastrous event that swept away so many lives and left behind the unspeakable griefs for the survivors. It is hard to even greet people Happy New Year when there are millions of people who are homeless and have lost their love ones taken by the tsunami. I lit a candle for world peace as I welcome the new year. I wished that those who survived will have the strength to move on. This morning when I walked into my kitchen, I noticed that the first bud of my white orchid has bloomed. I took it as a sign of hope, a sign of new life, and that life goes on.
Posted by michaelongline at 3:09 PM No comments: