The Fall of the House of Usher Poster 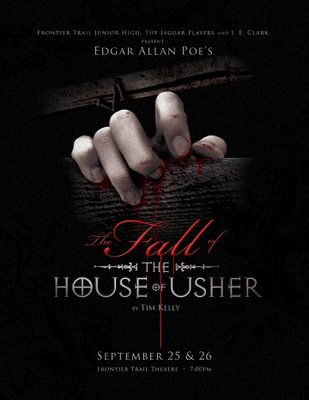 Here's the poster I designed for Eric for his students' play The Fall fo the House of Usher. Thanks to Lauren for being my hand model. The rest are all Photoshop. (No finger nails are harmed in the making of this poster.)

Posted by michaelongline at 2:04 PM No comments: 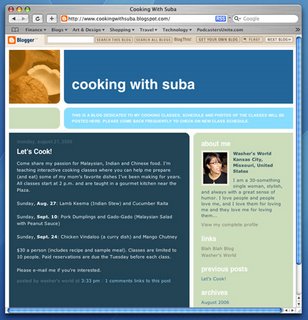 Suba is teaching how to cook a fabulous meals starting with weekend, August 27. She will using my kitchen to conduct her class - "A Gourmet Kitchen" as she put it. I helped her set up her own blog so she can post class schedules and pictures from the classes online. Of course, by helping her doing that, I get to be the food taster for all classes. Yum!

Posted by michaelongline at 3:18 PM No comments: 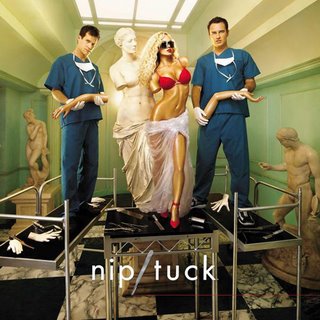 For those of you Nip/Tuck fans, I'm sure you're eager to find out what to expect this season, starting on September 5. I would have thrown another season premiere party like last season, but I'll be in Juneau, Alaska that day. I wonder if we can get the FX Channel on the cruise ship? If not, I'll just have to depend on my DVR. I've gathered a few spoilers from various sources and publish them here for the convenience of other fans. First of all, there's a list of celebrities appearing as guest stars - Larry Hagman (a surgery on his private part), Brooke Shields Christian's psychiatrist, actually a sexual-compulsive shrink), Rosie O'Donnell, Kathleen Turner, Richard Chamberlain, Cybill Shepherd, Sanaa Lathan, Jaqueline Bisset, Peter Dinklage (McNamara's night nurse for the baby) and Catherine Deneuve (who wants her dead husbands ashes be implanted in her boobies!) Then I heard, Julia (Joely Richardson) is going to give birth to an abnormal baby in episode three. And she will be off for about five episodes and come back for the season finale. Christian will be questioning his sexuality? Interesting. According to TV Guide.com, McMahon said, "[Christian] will be exploring new aspects of his sexuality." Remember Matt shot a guy who tortured him in the season finale. Apparently he didn't die, and we get to see the resolution the story in episode two. And Kimber will be all about Matt?! And Matt will fall in love with Kimber. Yikes! So, there you go. Enjoy the Fourth Season!

Posted by michaelongline at 6:20 PM No comments:

Will recently relocated to Minneapolis. Suba and I decided to compile some old pictures and put together a slide show as part of his going away gift. He burst into tears when we played for him, and of course, we all cried along with him. It was great career move for him and we are all very happy for him. However, we know we’re going to miss him dearly because he made such a big impact in all of our lives here. Farewell, my friend!
Posted by michaelongline at 11:47 PM No comments: 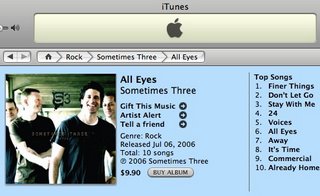 The album that I designed for Sometimes Three has been released on iTunes. That means the album cover will be exposed to a huge audience. I'm very excited for the band. Check them out and see what you think. Note that the picture that I posted on April 24 ended up being used for the back cover instead. I think it was a wise choice since they are a new band and it helps putting a face to the group. After all, they are VERY photogenic.

Posted by michaelongline at 11:17 PM No comments: 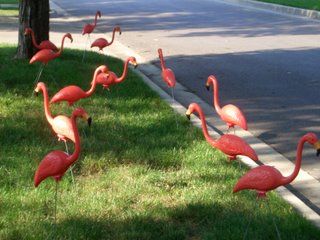 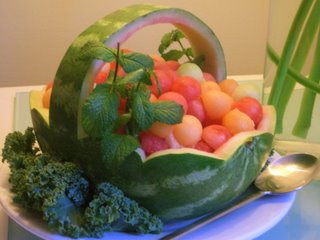 It's Flamingo Friday every Friday on our block during Summer. Each home volunteers to host the pot luck party. Mine was in mid June, and I think it was one of the best! (Considering my house is the smallest one on the block, it was a smashing success.) The first picture was in front of my yard taken two months ago. The second one is the watermelon basket I carved to bring to my neighbor's Famingo Friday Party last weekend.

Posted by michaelongline at 11:02 PM No comments: